Removes foreign materials after all other processes are completed 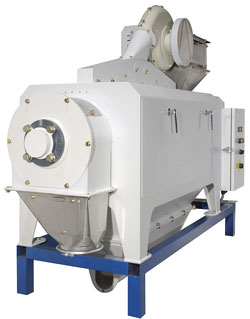 Satake began sales of the Final Separator on May 20 of this year. This machine is designed to remove foreign materials after all other rice milling processes have been completed. It can remove those contaminants which arise during processing, including balls of rice bran, insects, and detached germ and other small particles.

One problem suffered by rice milling plants is that stones, balls of rice bran, and insects can sometimes get mixed into the final product. Over the years, the industry has made great strides in preventing these contaminants from forming and entering the product flow. As public concern over the safety of food continues to rise, however, previous solutions may no longer be capable of meeting the needs of the most discerning consumers. Accordingly, rice producers have been requesting a machine that can reliably detect and remove contaminants immediately prior to shipment.

The Final Sorter was developed with sanitation in mind, so all contact parts in the Final Sorter are stainless steel and the advanced ventilation system minimizes residual flour. A compact machine body makes it easy to add to existing rice milling lines