The Agricultural Achievement Awards were established in 1884 by the Agricultural Society of Japan to promote development in the agriculture industry and the growth of farming villages. The awards are presented each November by the president of the Society, His Imperial Highness Prince Katsuranomiya, both to encourage agricultural innovation and to recognize practical achievements.

This is the first time a group of Satake employees, and not an individual Satake employee, has received this award. The four recipients were involved in the development of a multisensor which uses a combination of NIR and CCD cameras. This technology is the world’s first that can simultaneously sort and remove poor quality materials and foreign materials including stone and glass from input material. 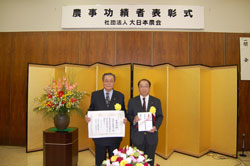 Also impressive is the range of this technology. Not limited to rice, this multisensor can be used to sort many varieties of beans and dry cut vegetables, as well as plastic pellets. It can be applied to many food and non-food industries.

This technology allows the agricultural industry to construct facilities that satisfy consumer desires for safe, high quality products. The Satake Sorting Development Group was recognized for their great contribution to the encouragement of local agriculture.