The 110th Anniversary of the Satake's Foundation

The 110th Anniversary of the Satake's Foundation 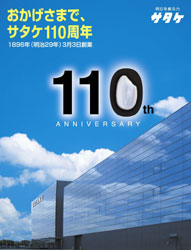 Satake Corporation was founded in 1896 when Mr. Riichi Satake, the founder of Satake Corporation, invented and began the production of Japan's first power driven rice milling machine, and will greet 110th anniversary on March 3rd 2006.

In the subsequent 110 years, Satake has been offering the industries "from terrace to table" equipment and technology, typified by rice milling machines, through a succession of successful developments and a wealth of accumulated research and knowledge. We are most grateful to all our customers for their patronage which has allowed us to become known and respected in Japan and over 140 countries throughout the world.
Today, Satake provides mills with the systems to prevent contamination and secure full traceability as well as the concept of "Safety, Peace of Mind, Tasty and Healthy", which upgrades food processing factories. In addition, Satake develops various analytical equipment such as DNA variety identification system. Also, the processing system of functional rice has recently become of new variation.
Along with the current micro-technology focusing on every single grain, Satake is also focusing on the cell-level nanotechnology with the establishment of the "Total Food Engineering System in the 21st Century" across the industries.
"Thanks to the support of our customers, Satake has survived times of upheaval for more than a century," Dr. Toshiko Satake, Chairperson said. "We should not forget that Satake can only succeed without the strong relationships with our customers. We will continue managing the corporation with sincerity and keep contributing to the development of society. We will continue to serve our customers' satisfaction under Satake's motto: "Customer First."