For achievement in industry, business and community involvement 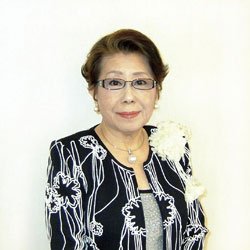 Toshiko Satake, Chairperson of Satake Corporation, was awarded the Blue Ribbon Medal of Honor by the Japanese government at a November 3rd ceremony. The medal recognizes Medal of Honor in recognition of her achievements in industrial development.

Toshiko is the eldest daughter of Toshihiko Satake, the second president of Satake Corporation. Since joining the company in 1959, she has participated in the management of the company with her late husband Robert Satoru Satake, the third president. Together, Robert and Toshiko Satake built Satake Corporation into one of the world's leading manufacturers of grain processing machinery.

Toshiko was awarded the Blue Ribbon Medal of Honor in recognition of her achievements in industry, business, and community involvement.

In 1944, Riichi Satake, the founder of Satake Corporation and grandfather of Toshiko, became the first member of the farm equipment industry to receive this award. Toshihiko Satake was the first individual across all industries to receive the medal after the end of the war. As of November 3, the Satake family has been honored across 3 generations.

Toshiko Satake had this to say about the award:

“I am honored and humbled to receive the Blue Ribbon Medal of Honor. I hope that my work has effected some positive change in the community, either by contributing to industrial development through improved grain processing technology, particulary in rice, or by moving toward becoming a truly family-friendly company by promoting a healthy work-life balance, extending childcare leave and opening an on-site day care center. Satake Corporation happily celebrates its 115th anniversary this year, and this medal truly belongs to all the managers and employees who have given their hearts and minds to this company over those 115 years. In the future, as in the past, I will work to develop a healthy dietary culture for Japan and the world and to maintain Satake Corporation's involvement in the community through our grain processing technology.”