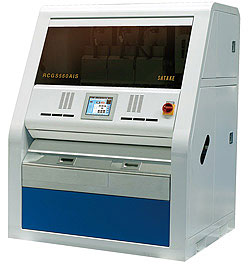 Cracked grains are ones in which the endosperm has cracked. This can happen when the husk is dried or if the moisture of the husk is absorbed too rapidly by the grain.
These cracks not only produce cracked rice when milled, but also have harmful effects on appearance, quality of taste and so on.
The Satake Cracked Grain Sorter is a device that recognizes and removes cracked grains from brown rice at high speed. This sorter makes it possible to actually improve the grade of brown rice as well as its quality (taste, texture and amount of cracked rice).
Optical sorters that remove foreign materials and discolored grains are not new, however rapid sorting of cracked grains was not possible. It had been a longstanding industry challenge to develop the appropriate technology.
Satake co-developed this machine with the Western Hiroshima Prefecture Industrial Research Institute (Kure city) and the Department of Electrical Engineering Graduate School of Advanced Sciences of Matter at Hiroshima University (Higashi-Hiroshima city)
With its collaborators, Satake successfully designed the world’s first Cracked Grain Sorter utilizing high-speed image processing.
This new machine incorporates many optical technologies Satake has cultivated through developing and marketing its other optical sorters, including lighting for capturing images and detecting cracked portions. This machine integrates these innovations on a large-scale greatly accelerating the sorting process.
Satake produces two models of the Cracked Grain Sorter: the “RCGS560IE,” which sorts only one time and has a capacity of 3.6t/h, and the “RCGS560AIS,” which sorts twice and has a capacity of 2.4t/h. Satake expects to sell this machine to Japan Agricultural Cooperatives (JA) and farming groups.

*This is the world’s first device that automatically sorts and removes cracked grains. (According to Satake Corporation’s research as of August, 2007)