Experience is the Best Teacher

Experience is the Best Teacher

25 years ago, along with my husband transferred to the US office, my family and I had opportunity to live in a city called Irvine, in the state of California, the United States. The city is 50 kilometers south of Los Angeles which is about 40-minute drive on the freeway. Irvine is famous these days for a rumor that Shohei Otani, a major league baseball player of the Los Angeles Angels is living there. 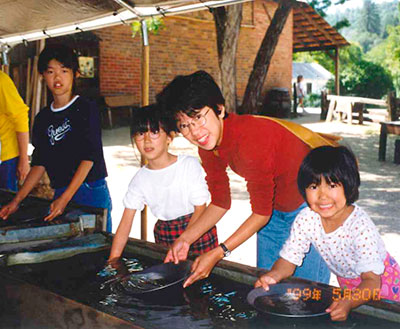 My daughters especially struggled on social studies. At the local elementary school, children would learn the geography and history of California during the class. My oldest daughter refused to go to school when she had social studies class and my second daughter often abandoned her homework and fell asleep.

I wondered if there was anything I could do to help my daughters. I couldn't teach them English, so I decided to take them out on a field trip. During the weekends and holidays, we visited the places mentioned in the textbook. I thought it was better to have some images in their heads. As we say "experience is the best teacher," we decided to hit the road.

What is "Gold Rush"?
In 1848, gold was discovered in the American River in California. This discovery triggered the Gold Rush. Many immigrants who dreamed of getting rich with gold flooded into the Pacific Coast and the population of the area skyrocketed. According to the textbook "Oh, California," the Gold Rush started in the town of Coloma, located in the east of the state capital of Sacramento at the foothills of the Sierra Nevada Mountains. My family and I drove about 10 hours north from our house to visit Coloma.

It is said that the very first person to discover gold in the Gold Rush was Mr. Marshall. He worked in a sawmill run by a German immigrant where he happened to find a piece of gold. Coloma is now an idyllic town in the countryside. With a map in hand, I tried to find the sawmill where Mr. Marshall found his first gold. I remember how impressed my family and I were to see the real starting point of the Gold Rush when we finally found the sawmill. We strongly felt the connection between the textbook and the reality.

Since the Gold Rush started in 1849, the people who came for gold mining were called "49ers". In Coloma, we were fortunate to be able to experience the gold mining just like the 49ers. We used the same equipment and collected gold by a method called panning. Panning is one way to look for gold using a round metal plate about 30 centimeters in diameter. First, we put the sand and water from the river into the plate. Then, we shake the pan inside the river to separate gravel and gold for extraction. Obviously, it was not an easy task to do this all day. We could understand easily why most people who dreamed of getting rich did not actually become rich.

Gold Rush also became an opportunity for invention. The problem miners had was that their pants would soon get worn out because of their hard work every day. One clothing store came to know the miner's troubles and started selling pants made of strong canvas. The pockets were riveted to prevent from being ripped and the fabric was indigo dyed to avoid stains. This was the beginning of jeans, and thus the world-famous jeans company was born. Learning that products invented through Gold Rush was still here for us today, we felt this historical event a little bit closer. We also became aware that gold did not only bought wealth to the state, but it also caused gravity to attract people which contributed to the rapid economic growth.

Giant sequoia, Taller than a 30-story building?
In California, there is a tree called Giant Sequoia, which is said to be the oldest tree on earth. According to the textbook, the Giant Sequoia is about 100 meters tall, grows as wide as a truck, and could live for thousands of years. The oldest one currently known is about 3200 years old. To see the Giant Sequoias, my family and I drove 8 hours from our home to Sequoia National Park, located east of Visalia in the southern area of the Sierra Nevada Mountains. 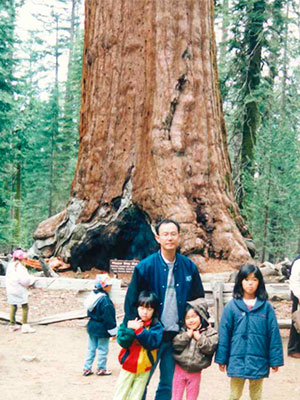 The Giant Sequoias were truly tremendous. My daughters looked up at it and hugged it, experiencing the size. The largest Giant Sequoia at the park was named "General Sherman" and its size was far beyond our imagination.

The starting point of Giant Sequoia is a spherical fruit that is only about 5 centimeters in diameter. It would take thousands of years to grow as tall as a 30-story building. I think this gives you an idea of the richness and vastness of the California nature.

This field trip for 'Experience,' not only helped my daughters to overcome their weakness in social studies, but also gave us a deeper understanding of California. I now understand that learning geography and history of where you live is essential to become fond of the place.

A Trip with Rice
During the field trip, there were some things that we always carried in our car. It was the rice cooker and California rice. When the trip became long, I cooked rice at the hotel and made rice balls. The rice did not upset our stomach even after long hours in the car. Thanks to the rice balls, we were able to have meal anytime without searching for a restaurant. 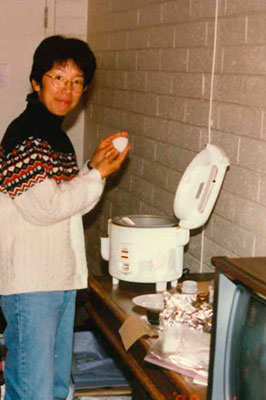 It has been about 20 years after we returned to Japan. Recently, I found out that it was Satake's rice milling machines that were milling the California rice we were eating in the US. I was surprised and grateful that Satake had supported our family's life in a foreign country. Satake's machines contribute to the lives of people around the world in various ways. I would be happy if I could be a help for someone enjoying rice through my work at Satake.