In your country, what kind of food do you feed babies other than milk?

In Japan, many parents start feeding babies with 1 tablespoon of thin (diluted) rice porridge once a day.
Watery rice porridge is prepared by boiling rice in 1:10 rice-water proportion. Before feeding it, parents smash it until it becomes smooth paste.

Adults who prepare baby food for the first time may think it's too much work.
"Are we going to make it separately from the rice we eat? " Should we fuss over every time making such small portions?", "It is my first time raising a baby, and now I have so many things to do ...", etc.

Actually, it's not difficult and they don't have to worry about it.
I would like to show you the easiest way which many parents are doing.

First, set rice and water in the rice cooker as you prepare rice for adults. Then, place a small heat-resistant cup in the middle of it. Then put 1 tablespoon of rice and 10 tablespoons of water inside of the cup, and just press the start button. After rice is done, smash the rice to turn it into a paste and separate small portion for today's meal. The remaining part will be frozen in a small package. Now you can use the porridge for several days by keeping in your freezer! 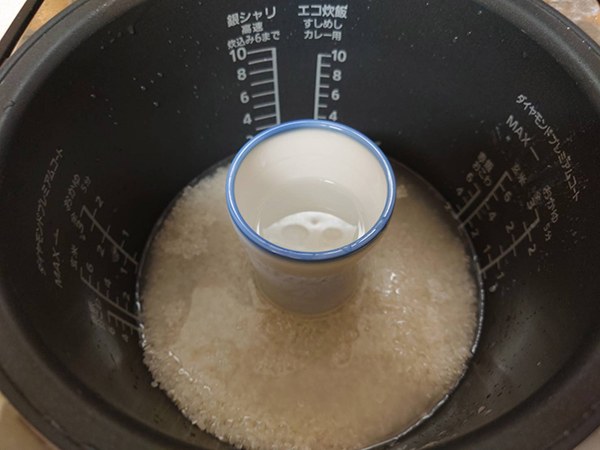 The progress varies depending on the baby, but feeding 1 teaspoon of the porridge everyday for at least for three straight days, and you can increase it to 3 teaspoons by the seventh day. Once baby gets used to swallow it, you can include various kinds of vegetables such as carrot and pumpkin in a paste form with it. Again, you can gradually increase the amount of vegetables starting with 1 teaspoon a day. That way, baby can eat diluted porridge as well as paste of several kinds of vegetables and tofu, dried young sardines, white-meat fish, or even go further to bread porridge or Udon noodles. Eventually, babies will be able to crush food with their own tongues. It means that it's time to reduce porridge intake. When baby starts trying porridge made of 1:5 rice-water proportion, we can say that weaning time is just around the corner.

As I just described, most families in Japan prefer rice as their babies' first food of choice. The main reasons are the following:

1. Rice is the source of energy as a staple food.
2. Rice is sweet and easy to swallow.
3. Rice is well absorbed.
4. Rice is difficult to cause food allergy.
5. Rice goes well with other foods.

There are many advantages to the body of a rapidly growing baby.

On the other hand, I'm curious about baby's first food in other regions of the world. For example, one of my Italian acquaintances told me that they could give unheated olive oil during the early stage of first food feeding. And another friend of mine living in Rwanda would feed his baby cow milk from the age of six months only. I think it's interesting that each country's special food preferences are incorporated into baby's meal. 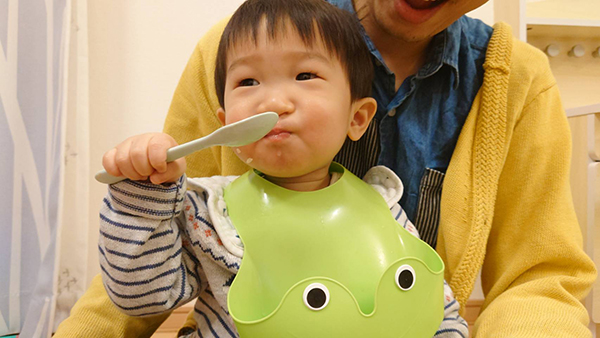 My son, who is one year and nine months old now, eats as much rice as I do. For me, as an employee of Satake which is a manufacturer of rice milling machines, it is the happiest thing to see his good appetite for rice.
Japanese self-sufficiency rate for rice as staple foods is 100%, but consumption of rice is decreasing year by year. I'd like to tell my son where his daily meals comes from and assist him to eat a variety of rice grown all over the country. "GABA Rice" may be effective during his examination period in the future. I want to extend his healthy life expectancy through dietary education from now.

I returned to my job after parental leave and working at Satake International Management Division. My goal is to contribute to the health of people around the world by providing tasty staple foods utilizing Satake's unique grain processing technology.