Honorary Chairman, the late Toshihiko Satake, son of the founder, was also an authority on Palm plants. His interest began when he was given a sapling of Livistona when he was 23 years old. He became fascinated by the palm and this stimulated his desire to know all about it.

However, at that time, since he found there were no available reference sources, he undertook to carry out his own studies.

Starting out as a hobby, he eventually studied palms for more than half a century until he became an internationally recognised authority on the subject.

Explanation of the Palm Collection 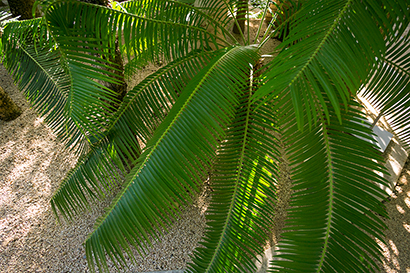 Satakentia palms have leaves like large feathers. It is a primordial palm found only in the Okinawa islands, most notably on the primordial Ishigaki Island, where it is specified as a natural monument. Toshihiko Satake was its discoverer and first to identify it as a new variety. In recognition of his work, it was named Satakentia Liukiuensis.

This variety is found only in the Seychelles, where it can grow to 40 metres in 100 years, when it produces seeds of 40cm diameter. After producing the seeds, it withers.The Double coconut seed in the museum was obtained by Toshihiko Satake from his pen friend in the Seychelles, when he later became President of the Republic. After a subsequent Coup d'etat, he lives in Europe.

In Palms, there is another type that has prickles on the trunk and/or leaves. It has evolved with these prickles for self-protection.

Toshihiko Satake devised almost Japanese names for some palms. For example, the Japanese name for this palm is Tokkuri palm. Tokkuri means a sake bottle and the shape of the lower trunk is similar to a sake bottle, hence the name

We usually imagine palms as tall trees. However, this palm is a dwarf variety, which is fully grown at 30 cm height.

There are fewer varieties of Cycad than Palm, since only 118 varieties are known to exist. The cycad belongs to the cycadaceous plant family, which is prehistoric in origin, dating back more than 100 million years. All varieties are now scarce and are threatened with extinction.In the Satake conservatory, there are several rare cycads.
In 1992, Satake donated 40 cycad plants to Hiroshima University, who have also established a conservatory. Those cycads are already being used as valuable subject for study. Cycads are helpful for the study of genes.

It is the rarest cycad variety in the world, having declined as a result of being consumed as a food. Only three examples are known to survive. One is in South Africa, its country of origin, and the others are in England and in this conservatory in Japan. Unfortunately all three plants are male, since the female stock is already extinct. It is hoped that that bio and genetic engineering will enable its revival by creating a new Encephalartos Woodii.

It is native only to Mexico, where a few examples survive. It is second in the top ten of world plants threatened with extinction. In 1996, male and female stocks donated to Hiroshima University put forth buds. The local newspaper splashed news of this important and significant event on the cover page.

This variety survives only in Cuba, where it is another variety threatened with extinction. Toshihiko Satake was very anxious to obtain a specimen of this rare cycad. When he donated a rice milling machine to the Cuban government, President Castro asked him what souvenir he would like. He immediately replied "a Microcycas". As a result, ten microcycas are now planted in the centre of the conservatory, where the delicate shade of green of the buds give us a feeling of tenderness. The buds sprout from May to July. Ten Microcycas are planted in the center of conservatory, the delicate shade of green of bud of Microcycas gives us of feeling of tenderness. The bud sprouts from May to July.

The Satake Headquarter 'crystal' building was completed in 1994 and includes a substantial 'palm house' conservatory at the entrance. In this conservatory are housed 78 varieties, 230 specimens of precious palms and cycads, which were collected by "Doctor of Palm", the late Toshihiko Satake.

In addition, a nearby Palm Museum and Library is used to exhibit and store 500 varieties of palm seed, rare literature and memorabilia related to the subject.
There are many interesting things to see. Let us introduce some of the show pieces, which you can see if you join the 'Palm World'.

The coconut pearl can form in the endosperm of the coconut in rare circumstances. It is estimated that only one pearl forms in every seven hundred and fifty thousand coconuts and they are rarely discovered when removing the endosperm as food. This example was exhibited in Osaka City in 1990 at an exposition for flowers and greenery.

This magnificent folio was drawn and painted by hand between 1823 and 1850 by a well-known artist who was commissioned by the Italian government. Only two sets were produced, one of which is here in our conservatory and the other is held by the British Museum in London.

The Palm Crab is found in Okinawa Island, where it is eaten as a food. It belongs to the hermit crab family and has a habit of climbing trees and eating coconuts. As a result, it has been given this common name.